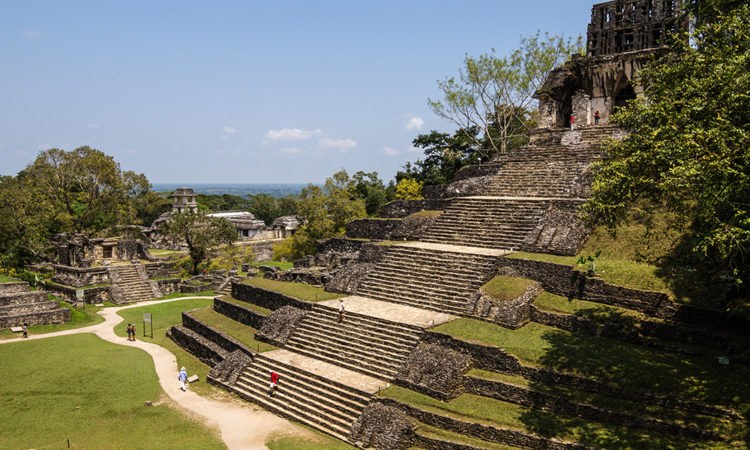 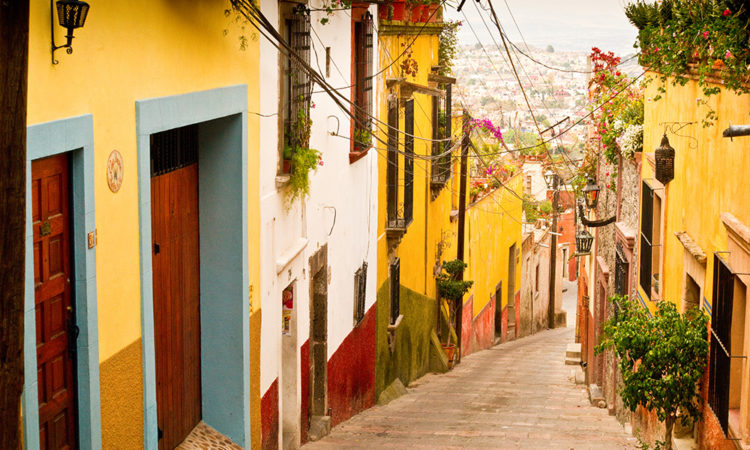 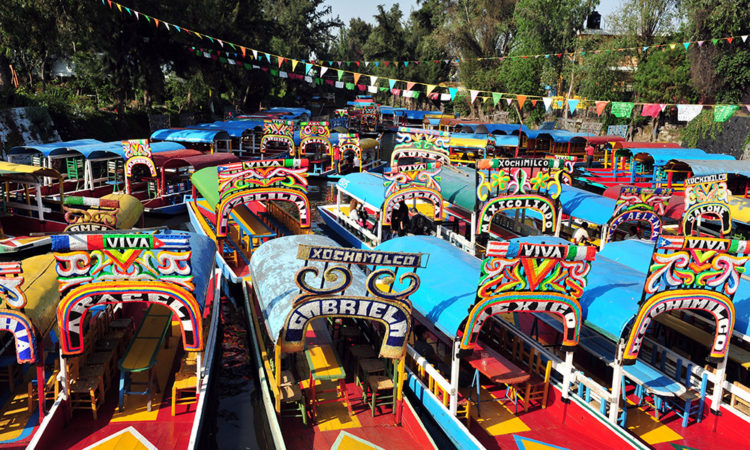 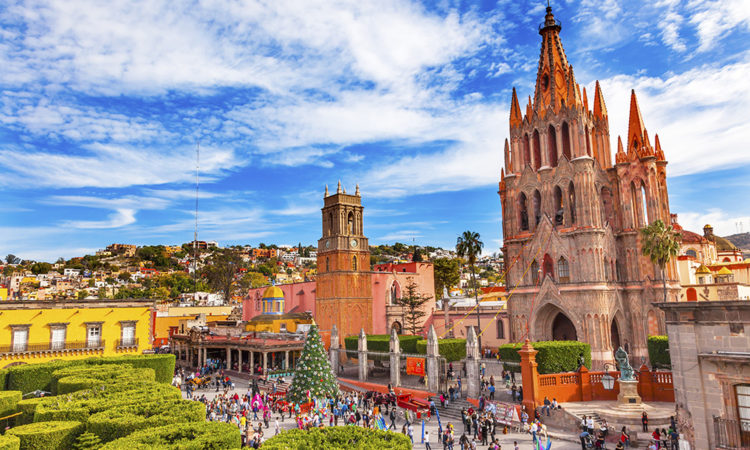 From the deserts of the north to the humid south, from waves of the Pacific to the resorts of the Caribbean, where do you start with Mexico? A country that geographically is part of North America, bordering the USA to the north stretches down to Guatemala in the south. The legacy of Mayan, Aztec and Spanish cultures have left an intriguing mix – colonial cities, ancient pyramids and culinary delights. Although the all-inclusive resorts that line the coasts are popular, the real adventure and soul of Mexico lies elsewhere.

Mexico City was founded by the Spanish in the 16th century on the remains the Aztec capital Tenochtitlán, today is home to twenty million inhabitants. Often called DF for Distrito Federal, the city is vibrant, noisy but always enthralling; with lively plazas, peaceful parks, mariachi bands, boutique hotels and modern cuisine. The impressive Aztec pyramid Teotihuacán lies just outside the city and is certainly worth a detour to view it.

North of the capital is the heartland where colonial towns like San Miguel de Allende, Guanajuato and Morelia were built from the gold and silver fortunes in the 16th century. The western state Michoacán is one of the best places to celebrate the Day of the Dead festival in November. Further north still, in the terracotta-tinted canyons, gorges and valleys of the Sierra Madre range is one of the world’s greatest railway lines. The Copper Canyon route crosses thirty-nine bridges and passes under eight five tunnels on its way to the Pacific. The journey is best taken over a few days, stopping en route to hike through the rugged landscape and meet the fascinating Taramuhara Indians.

The arid Baja California Peninsula is over a thousand kilometres long but just eighty kilometres wide. The calm water of the Sea of Cortés to the east is the perfect breeding ground for marine species including turtles, dolphins and whales. Tiny fishing villages have been turned into fashionable resorts for jet-setters, like Los Cabos (San Jose and San Lucas).

Just south of Mexico City is Taxco noted for refined silverwork and Puebla one of Mexico’s many World Heritage sites. Further southeast is Oaxaca, the country’s foodie centre. Salivate at the sight of chewy tortillas topped with beans and cheese or steaming Oxacan mole tamales, a stable of the region. Grab a cold beer and dig in to a smoky enchilada. Outside the city the forested Sierra Norte is home to charming Zapotec villages and wild cats.

Descendants of the Mayans inhabit the next door state Chiapas, where the ancient religion and customs are still observed. San Cristobal is the hub from where you can plan visits to the enormous Aguas Azul Waterfalls, a boat trip along the Sumidero Canyon and Palenque ruins in the jungle.
For many travellers the highlight is the Yucatán peninsula, once the home of the Mayan civilization. The Mayan pyramid Chichen Itzá has been included in the ‘New Seven Wonders of the World’, and nearby Uxmal is no less impressive. Secret subterranean pools called cenotes abound in the limestone countryside and provide a special swimming experience.

Delightful colonial cities, most notably Merida and Campeche offer a slice of real Mexico and are a pleasure to get lost in. Along the Yucatán’s coast is the Riviera Maya prepare for some serious relaxation on the idyllic beaches, snorkel with colourful fish in the warm tropical waters or explore the quiet ruins of Tulum that overlook the ocean from its cliff-top position.

Guacamole is a well-known dish, made from mashed avocados, onions, tomatoes, lemon juice and chilli peppers (and sometimes garlic) and often eaten with tortilla chips.

Drink
Tequila or you can go for Mezcal with a gusano de maguey (worm in the bottle). The beer is world renowned.

Festivals
In early February, La Candelaria particularly in Tlacotalpan where an image if the virgin is floated down the river. In October Guanajuato hosts the Cervantino festival which has become a huge arts event. Between 31 October and 2 November, in many parts of Mexico, rural cemeteries seem to come alive as villagers set up an all-night vigil to entertain returning souls. These celebrations, known as Day of the Dead and All Saints, are a fascinating spectacle. The ground blazes with candles and orange cempasúchil flowers whilst the air is scented with copal incense.

On November 22, in Mexico City's famed mariachi square is a time to pay homage to St. Cecilia, the patron saint of musicians. Mariachis descend on Plaza Garibaldi for a concert and inevitably involves dance, drink and song.

When to go
The north is dry throughout most of the year. In the south the driest months are November to April. The southern states wet season is between May and October, although the bursts of rain tend to last just an hour or two in the afternoon. Mexico does get surprisingly chilly during winter, but both coasts stay warm all year round. The Caribbean coast is best avoided during October when hurricanes are common. Hotels get booked up in advance for August and Day of The Dead.