5 places to get some winter sun in Latin America 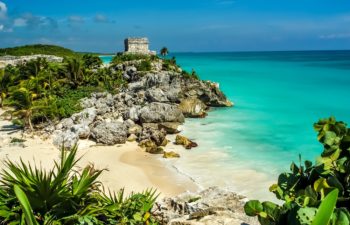 The nights are drawing in, the grey skies cover what little day we have and the scarves and hats have been pulled out and dusted off. As they say in Game of Thrones – winter is coming. But the cold weather in the northern hemisphere, means warmth in the south. It’s summer in Latin America and one of the best times to discover the continent’s mountains, beaches, culture and food. Here’s our 7 picks for the best spots to get some winter sun in Latin America

Bahia, Brazil
The northern state of Bahia in Brazil is blessed with some of the best weather in Latin America. Year around temperatures between 25°C and 30°C and over 250 hours of sunshine every month create the perfect winter getaway. But it’s not just the weather that makes this region such a great place to travel. Wild national parks, hundreds of miles of white sandy beaches fringed with palms trees, sleepy fishing villages, beautiful pastel-coloured colony architecture and UNESCO World Heritage sites and tasty cuisine that perfectly blends the Afro-Brazilian culture. Try visiting Salvador, the capital of Bahia, in February for a unique alternative to Rio de Janeiro’s Carnival.

Cartagena, Colombia
This colourful city of Cartegana is nestled on the northern coast of Colombia overlooking the clear blue waters of the Caribbean Sea. Between December and March, the city sees almost no rain and bright sunny days. There’s a wealth of boutique hotels many of which are housed within old colonial palaces and the city has its fair share of world-class museums, galleries, music venues and restaurants to keep your entertained. For those who prefer to spend their holidays away from cities, there are miles and miles of coastline in near reach including the Tayrona National Park. Hikers can head inland to walk the challenging trails to the Lost City. The sun-drenched islands of Baru and Rosario are only a short boat trip from the city.

José Ignacio, Uruguay
While Uruguay doesn’t spring to mind as your typical summer vacation spot, the country is less crowded and the beaches much better than neighbouring Argentina. Along the coast lies the small fishing village of Jose Ignacio built around a 19th century lighthouse. Favoured by jetsetters, the area has become somewhat of an escape for the super-rich and celebrities in recent years. During the summer months the area booms with pop up bars, concerts and parties. Spend lazy days sunbathing on the beach and swimming in the refreshing Atlantic waters and by night dine in one of the restaurants or beach-shack bars. Further down the coast there are some even less developed spots where isolated wooden cabins fringe the edge of deserted beaches, the only sound being the crashing of waves.

Tulum, Mexico
Tulum lies along the Riviera Maya on Mexico’s Yucatan Peninsula south of Cancun. Comfortable temperatures hovering around 28°C and a light sea breeze during December to February make it an excellent choice for a winter getaway. The area is perhaps best known for its Mayan temple which is perched overlooking the ocean. This idyllic region is known for its vast stretches of white sandy ocean and boutique accommodation. There is plenty of exotic marine life for snorkellers and scuba divers as well as offering the opportunity for swimming with whale sharks, the big gentle giants.

Bocas del Toro, Panama
Bocas del Toro on the northern coast of Panama near the Costa Rican boarder is an archipelago of lush islands. Though the area sees its fair share of rain, this only goes to keeping the islands fresh and green and winter is sunniest time. The islands have a distinct laid back Caribbean vibe. Secluded wooden over-the-water bungalows sit just off the coast from the tiny islands. Though the islands are excellent for hiking and bird-watching, their forte is the spectacular turquoise waters which can be used for diving, snorkelling, kayaking, surfing and swimming. Dolphins can be seen jumping above the sea and huge shoals of colourful exotic fish inhabit the underwater world. Chill on a hammock, relax on one of the deserted beaches and gorge on freshly caught lobsters.