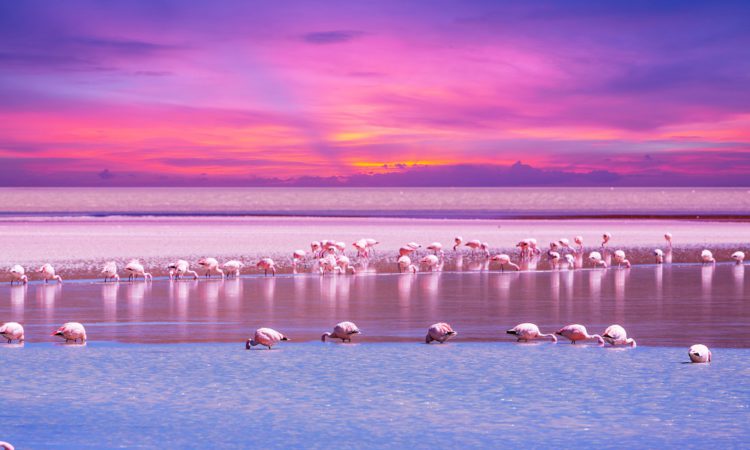 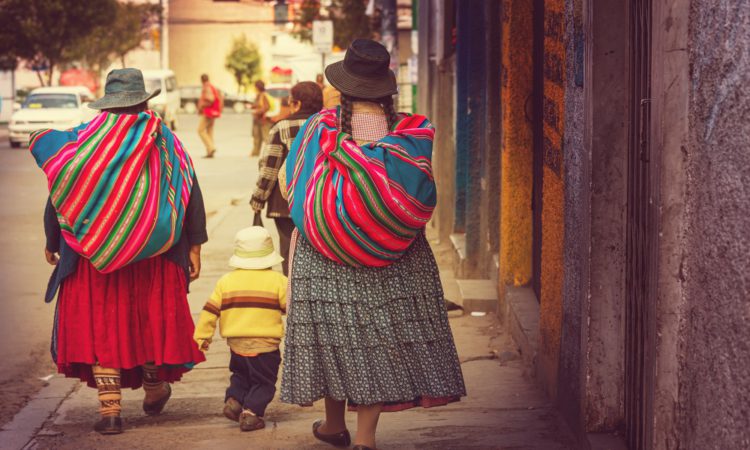 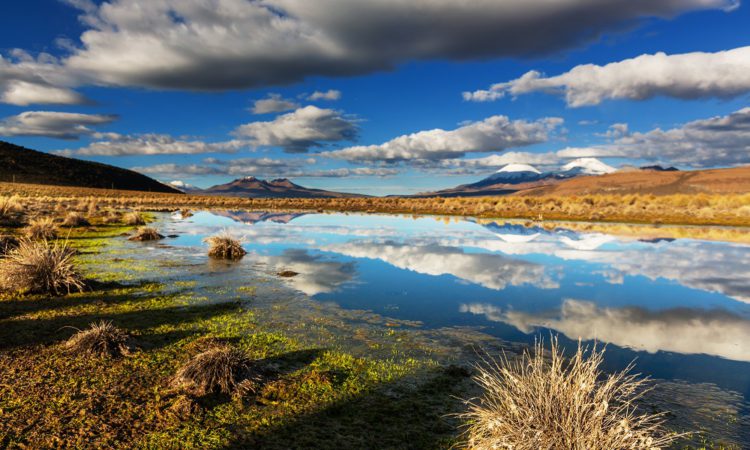 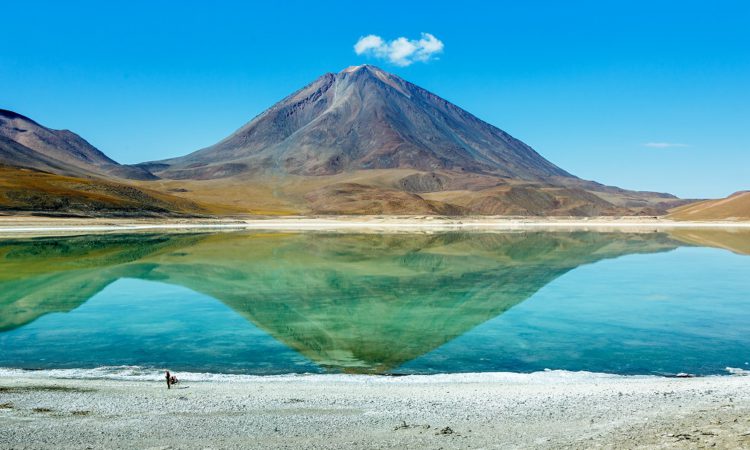 Follow in the footsteps of bandits and revolutionaries to South America’s most adventurous country.

Bolivia is a diverse and landlocked nation of snowy peaks, high plateaus, colourful deserts and tropical lowlands. The slightly tricky logistics of getting to Bolivia have arguably left one of South America’s most authentic countries, unspoiled by mass tourism.

Bolivia will take your breath away, not just because of its spectacular scenery, monuments and relics from ancient civilizations or wildlife, but as large swathes of the country are very high altitude including the de facto capital La Paz, which sits at over 4,000 metres above sea level. In fact, there are over a thousand peaks that tower over 5,000 metres, more than any other country in Latin America.

La Paz nestles in a canyon surrounded by snow-capped mountains. It’s an intriguing place – women in traditional bowler hats and colourful street markets where locals sell everything from house-wares to llama foetuses for luck. Just outside the city is the Valle de la Luna (Moon Valley), an unworldly, eroded landscape resembling the craters on Mars or the moon. For the adventurous, Huayna Potosí Mountain offers one of the easiest 6,000 metre climbs in the world.

The highest navigable lake in the world straddles both Bolivia and Peru to the north. The cobalt waters reflect the surrounding mountains and ever-changing colours. A stop in the lakeside pilgrimage town Capacabana will reveal a culture and customs unchanged for centuries and makes a good base from which to hike around the lake. Legend has it that the Island of the Sun was the birthplace of the Incas, and there are plenty of fascinating artefacts left here by them. The nearby pre-Inca ruins of Tiwanaku, the cosmological centre for the Tiwanaku Empire are well worth a visit.

The southern cities Potosí and Sucre boast impressive colonial architecture. Sucre is the official capital and nick-named ‘the white city’ due to the light volcanic rock here the plazas and cafes are always lively.

Potosí was once the richest city in the Americas after silver was discovered in Cerro Rico in the 16th century. The city is a shadow if its former glory, but mining it is still practiced today albeit with very archaic methods.

Bolivia has many natural highlights, but perhaps its finest, like a twinkling jewel studding its southern altiplano, is the Uyuni Salt Flats – the largest and highest in the world covering twelve thousand square kilometres. The endless plains of salt seemingly continuing forever are best explored by 4×4. Be sure to visit Isla del Pescado, an impressive black island in its centre that’s covered with giant cacti. Over the last few years a number of hotels created entirely from the salt have popped up. They are not only a unique experience but eco-friendly.

The high altiplano is home to more than just the salt flats. Other natural wonders include the Thermas de Polques hot springs and bubbling Solar de Manaña geysers and sulphur pools, best visited when they are most active during sunrise. The bizarre stone formations in the windswept Siloli Desert and the brightly coloured lagoons inhabited by flamingos are often included on tours of the area.

Lesser known are the tropical lowlands, west of Santa Cruz, Amboró National Park encompasses three ecosystems – the Amazon basin, the foothills of the Andes and the Chaco plain, and is home to thousands of species of insects, birds and plants. The park contains more butterflies than anywhere else on earth. In the remote eastern corner, near Brazil lies Noel Kempff Mercado National Park, where savannah meets Amazon forest. Madidi, in the far north, is a pristine Amazonian watershed. And what’s more, the lodges in this region provide some of the best examples of indigenous ecotourism in all of Latin America.

Food
Bolivian food varies with altitude and latitude. When in La Paz try sajta de pollo, hot spicy chicken with onion and potato, or Cochabamba go for silpancho, fried breaded meat with eggs, rice and bananas, in Sucre Salteñas are the best savoury pasties you can get, and in the Tropics go for Surubí (a white fish from the Amazonian rivers).

Drink
Singani is the local brandy. Chuflay is the very drinkable singani plus 7 Up. The hot maize drink, api (with cloves, cinnamon, lemon and sugar) is good for breakfast, especially on the freezing cold Altiplano.

Festivals
Bolivians love a party and fiestas are a fundamental part of their lives. These take place the length and breadth of the country with such frequency it would be difficult to miss one, even during the briefest of visits. The biggest is Carnival in Oruro in February / March.

When to visit
The weather varies with altitude as much as season, but generally the best time to visit is between May and October which is actually their winter, but is the dry season; though July and August are the busiest months. Some of the best festivals are between December and March during rainy season, and you will find very few tourists visiting during this time, the mountains are greener but roads in the jungle lowlands can be tough going.