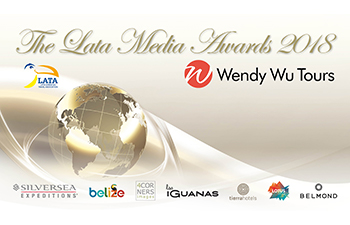 LATA is delighted to announce the winners of the LATA Media Awards 2018 sponsored by Wendy Wu Tours.

The LATA Media Awards recognise innovation and excellence across the British travel media landscape with a specific focus on Latin America.

Celebrating and rewarding inspiring and creative Latin America stories and photography, the winners of the 15th edition of the LATA Media Awards were selected from over 150 entries by a strong judging panel composed of key figures from the Latin American travel industry.

The winners were revealed at an event that took place at the RSA House in London on 22 May, which was attended by key members of the Latin American travel industry and some of the UK’s most prolific travel writers and photographers.

Winners and runners-up are detailed below:

Winner: Abigail King, ‘Pre-Columbian art in Ecuador and the surprising question it asks’, Inside the Travel Lab

Runner-up: Shafik Meghji, ‘Best things to do in Ecuador’, Kimkim.com

Best Self-Published Feature of the Year Award, sponsored by LATA

Runner-up: Jennifer Richt, ‘Belize in it: An Example of Ecotourism’, Jacada Travel

Best Photography of the Year Award, sponsored by 4 Corners Images

Winner: Mike Unwin, ‘Living at one with the Creatures of the Canopy’, The Sunday Telegraph

Runner-up: Andrew Purvis, ‘My David Attenborough moment in the jungle’, The Sunday Telegraph

Consumer Magazine Feature of the Year Award, sponsored by Belize

“The quality of the entries for the 2018 LATA Media Awards was extremely high and LATA would like to thank all the talented journalists and photographers who entered the awards. We are delighted to have welcomed so many key figures from the Latin America tourism industry and fantastic writers to this flagship annual event, which brings the Latin American region to life through creative and interesting stories and powerful photography. In addition to the headline sponsor Wendy Wu Tours, other sponsors included Silversea Expeditions, The Belize Tourism Board, Belmond, Tierra Hotels, LOTUS LATAM, Las Iguana, and 4Corners.”

RT @Mr_Routes: A taste of #LatinAmerica available at @NeroUK for a limited time - will be giving it a go next time I drop in. @latauk ☕️☕️…

RT @lonelyplanet: Patagonia's national parks will lift you into a magical landscape of rock and ice. https://t.co/4NXiGOsmaf

RT @galapagossip: Looking for an unusual gift for #ValentinesDay? 💕 Adopt an Endangered #Galapagos animal for your loved one! Available as…