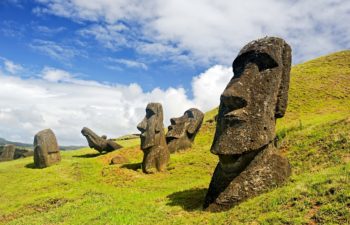 Easter Island sits in an isolated location of the Pacific, a 6-hour flight from mainland Chile. To give you some idea on its remoteness, the nearest inhabited island is Pitcairn over 1,280 miles away. Though it was annexed by Chile in the late 19th century, it retains its distinctly Polynesian roots with over 60 percent of the population being descendants of the native Rapa Nui.

The island is perhaps most famous for the 887 large statues called Moai which dot the landscape and suggest that the ancient culture was thriving and industrious. However, their sheer size and numbers have baffled scientists and historians since their discovery. So what is known about the history of Easter Island?

It is thought that the Polynesians arrived sometime around 1000 BC, most probably by canoes from the Marquesas or Gambier Islands, both of which are over 1,500 miles away. Some scientists suggest that the settlers arrived from South America which is supported through the evidence of sweet potato consumption, but has never been fully proved. When they arrived, the island was lush with trees and vegetation. The settlers thrived and over the centuries the population ballooned to a high of around 15,000. This put severe pressure on the small island’s natural resources and when by the time European adventurers arrived the population had dropped to just a couple of thousand. The introduction of European diseases and the slave trade of the reduced the numbers to just over a hundred by the late 19th century.

The Moai statues were created at the height of the Rapa Nui population. It is thought that the tribal community believed that their dead were important in providing the things they needed and the statues were created to honour their ancestors. Many of the settlements were built along the coastline and the moai were built along the edge of these villages with their backs to the ocean.

Scientists believe the trees on the island were chopped down and used as rollers to move these huge statues from the quarry to their positions near the coast. Eventually, over-deforestation led to the extinction of all 21-tree species and the decline in the Rapa Nui people. With no large trees left on the island, the community could no longer build boats diminishing their ability to fish effectively. The trees also acted as a shelter providing shade for the rich soil. With nothing to protect it, the top soil eroded creating an inability to grow crops. The further extinction of all land birds and the introduction of the Polynesian rat only furthered social upheaval.

The mid-16th century marked the end of the Ancestor Cult and the beginning of the Bird Man Cult which came to power through warriors known as matatoa. With no way of building new statues, it is thought that the new cult believed that the dead could now be contacted through humans instead of monuments and many toppled. These humans were picked by the god Make-make through competition. One of these is the annual ritual of collecting the first sooty tern egg from Motu Nui islet, swimming back to shore and climbing the cliff to Orongo village, a practice which is still observed today.

Our head of #sustainability, Megan Parkinson, joins the #TWSustainabilitySummit to discuss the importance of sustai… https://t.co/m5eU6320Md

In @MegaHeid's latest piece for the @Telegraph he recounts his experiences of travelling to #Peru through the Sacre… https://t.co/oHpvmVRf6H